Aikido, an art to discover yourself 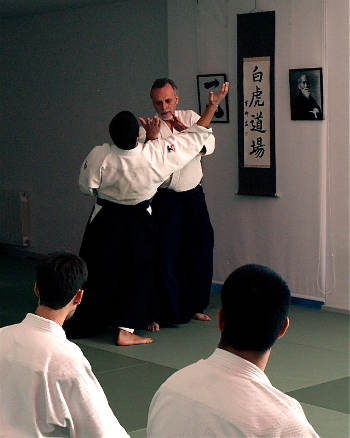 Aikido is a Japanese martial art developed by master Morihei Ueshiba. To control the opponent it does not depend on physical strength and can be practiced by people of all ages.

Aikido is BUDO. Budo is the way of confronting oneself through the Japanese martial disciplines. Budo has its origins in Bushido, the moral and ethical code of the Samurai, which shaped their character and instilled their spiritual and ethical values such as sincerity, courtesy, honesty, humility, benevolence, courage…

In Aikido we learn how to immediately cooperate with any attack. We do not go against the current of power but with it. We do not confront the opponent’s strength, but rather we neutralize that strength in circular and spiral movements.

There are no competitions in Aikido.

Aikido means the way of harmonizing the vital energy. (Ai=harmony, Ki=vital energy, Do=way). Through the practice it becomes clear that the secret of the art does not lie in the control of the body but in the control of the mind and Ki (気), our vital energy. As the level increases, the Aikido practice becomes first of all a way of observing and confronting oneself. The opponent becomes an ally, for he helps us confront our weaknesses such as our fear and our aggression.

Aikido unites mind, body and soul. Therefore Aikido undoubtedly may be called a true art. Art has no limits, no reachable goal. It is a path of a lifetime.